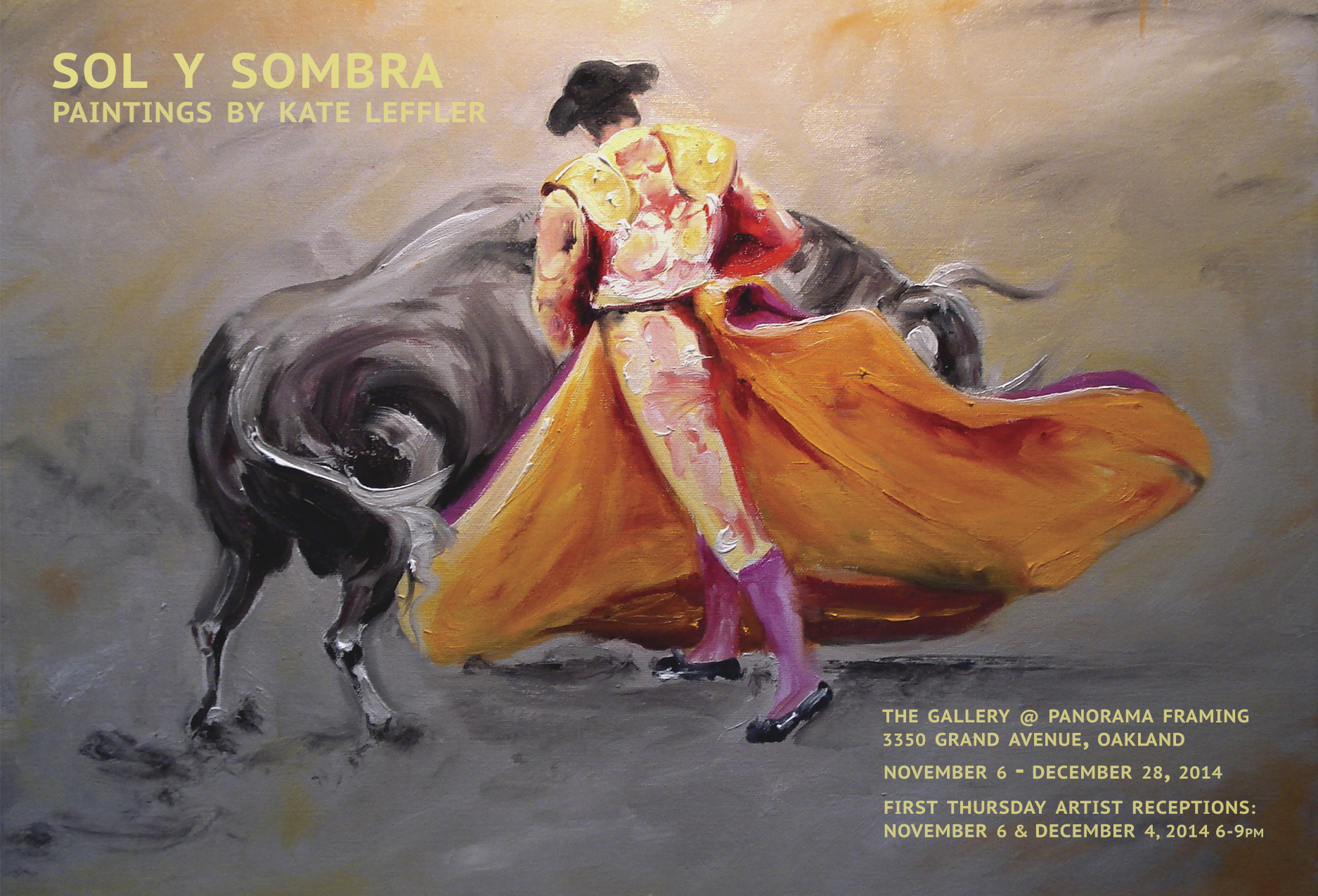 Kate Leffler’s paintings are an exploration in Sol y Sombra (sun and shade). In essence her execution of color and light are a benchmark of experimentation in silhouettes, capturing the perspective and eloquent marriage of moving shadows. Though classically trained, her primary passion is oil paint; however, she remains untethered in her combinations of mediums, exploring abstraction and realism in her Taurine Series – a collection of paintings on the study of bulls and bullfighting.

Sol y Sombra explores the Taurine Series – the light and darkness cast on the controversial subject of Spanish Bullfighting combined with Leffler’s personal research on the art form. Her works echo a curiosity in art history: artists as far back as Goya and Picasso have paid homage to the ceremony, tragedy and pageantry of bullfighting events.

Bullfighting has been an annual tradition since 1126 CE in Pamplona, Spain. In 1923, Ernest Hemingway saw his first bullfight there and nine years later he wrote ‘Death in the Afternoon’, containing a full glossary of bullfighting terms including remarks about controversy he claimed, “Anything capable of arousing passion in its favor will surely raise as much passion against it.”

“In the bullfight world I’m considered an ‘aficianada practica’”, said Kate, (meaning one who practices this art form), “but I never fought professionally. I took up this art form so I could better paint it. To learn the fear, passion and all the nuances of it so my canvases could come alive.” After retiring three years ago, her art is her communication – and much like Hemingway – her passion provides us with a bulls-eye view of the ring. In works such as “Passion II,” Kate draws attention toward the confronting gaze of a bull. The viewer-as-matador must reconcile emotions and interpretations Kate has left open to arouse fear and empathy.

As a male-dominated art form, bullfighting carries its own rules, codes and regulations, which have only begun to allow women into the ring in the last fifty years. For a woman to become a Matadora is tremendously difficult, requiring the sponsorship and support of a reputable matador. Kate helped start three schools in the USA. One in the Central Valley, one in Texas and one in Anaheim; all three of them were in support of American matadors and in one case a matadora.

Kate grew up in the Midwest where she attended the Detroit Society of Arts and Crafts. She has resided in the Bay Area for 40 years. Her research has caused her great joy as well as great danger, but the outcome shows an evolved sophistication in her work. Outside the ring, Kate also appeals to a number of other aesthetic appetites, including her recent submission in the annual Emeryville Art Show – a triptych of the Bakery Lofts, where she resided for four years.